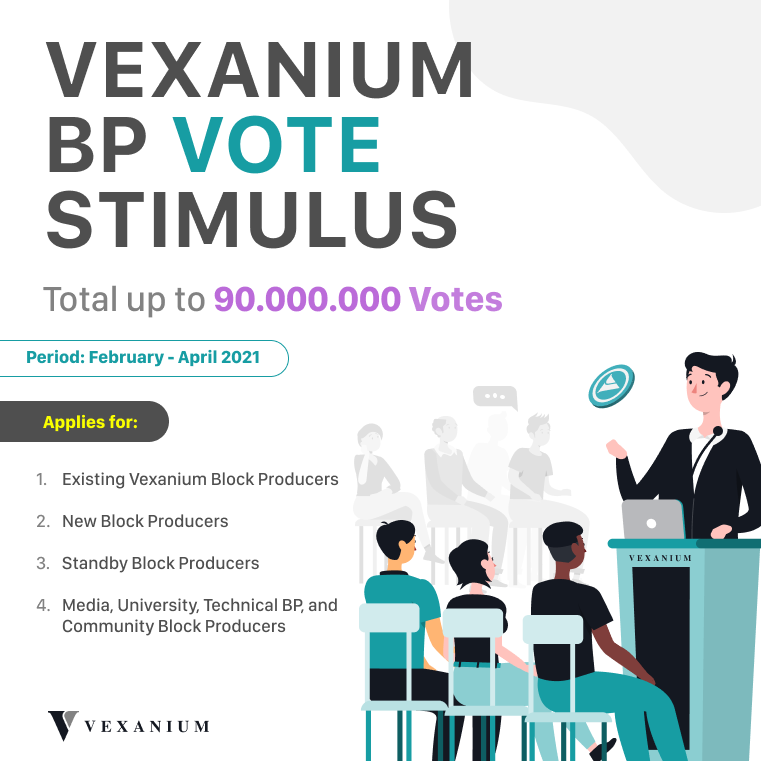 Based on the agreement between the Vexanium core developer team and block producers (BP), one of the other programs that will be continued for 2021 is Vexanium BP Vote Stimulus. This program, which has been running for about a year, aims to provide votes to all BPs within a certain period of time. This program is also expected to be a stimulus that can attract new BPs, as well as give appreciation to existing BPs; be it Community BP, Technical BP, and / or Stand By BP.

This program has more or less the same mechanism as before, namely the core developers of Vexanium will distribute a number of votes over a certain period of time to various BPs to push the BP ranking to the top 21 BP. What distinguishes it from the previous year’s program is the categorization of BP types that will get the distribution of votes during this program.

Existing Vexanium Block Producers will get a maximum of 5,000,000 stimulus votes. Here is the detail:

There are a few notes about existing block producers:

**Applies specifically only for new BPs not from Existing BP, so an Existing BP cannot just exit then changed its name.

Standby BP with synchronous block will be given to the top 21 BPs. It will rotate for 1-3 days to 1 week in 1 month (this motivates standby BP to remain a Backup BP and develop the infrastructure to keep the Vexanium blockchain running).

If an Active BP has a backup then it is possible that the Backup BP will enter into the stimulus votes backup rotation.

Every media, university. and community can become a BP. This type of BP will get stimulus votes to become Standby BP and at least be able to claim votes as Standby BP. If the BP is an active 21 BP, active in the community, and also has a media it will get additional stimulus votes

With Vexanium BP Vote Stimulus, it is expected there will be 350 million votes in a period of 3 months from now. For more information on how to join the program or other questions and for new block producers who want to make or install a BP server there is a free 3-month server package (terms and conditions apply), you can send an email to:
info@vexanium.com
or
Telegram by PM (personal message) to @andrevexanium @satpamvexanium or @dannybaskara.