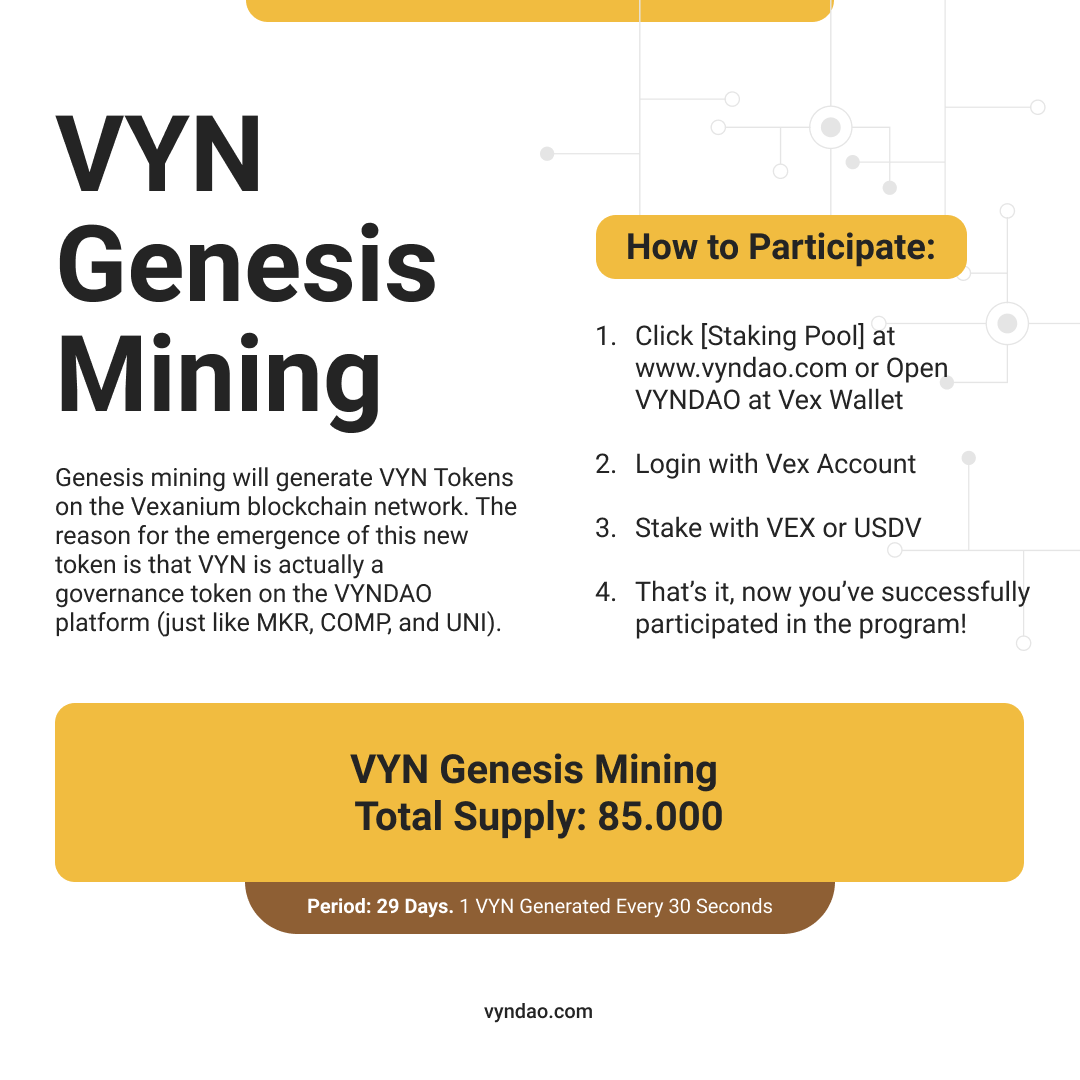 Hi Vex Partners, on 4 December 2020 the VYNDAO will initiate VYN Token Genesis Mining. VYNDAO is an organization that develops decentralized technology for borrowing, savings, and a stable cryptocurrency on the Vexanium blockchain.

Basically, genesis mining will generate a new token, called VYN Token on the Vexanium blockchain network. The reason for the emergence of this new token is that VYN is actually a governance token on the VYNDAO platform (the same as MKR, COMP, and UNI). VYN will enrich all of the Vexanium ecosystem, together with other developed decentralized finance applications at the network.

VYNDAO Governance which is run with the help of VYN Token will run automatically with a smart contract or in other words, a system that is community-led self-governance. This is because users will vote for the governor with VYN tokens, so the user’s votes will be very influential in the future development of this network to decide future new mining pools, pool winners, and many more. All proposals and decision making are voted via VYN within the community, which means minority obeys majority.

The VYNDAO developers have faith that this token can be the community itself. In hope, the VYN community would initiate bolder, more radical, yet sincere decisions for the future of this token. Because basically, this token belongs to every user in the ecosystem, which is the DeFi users, governors, and all of the miners.

As mentioned before, the purpose of this token is to function in the governance system and become a liquidity tool by giving VEX coin holders to stake their coins to get VYN Tokens.In addition, users can also use this token to sell on the secondary market (in the near future it is still on DEX but in the future it will be listed on CEX) or use it to vote on the governor (Multisyg key at VYNDAO (or a proposal vote) to improve the quality of the network and ecosystem. VYNDAO.

VYN tokens are tokens with a limited supply and can be said to be rare. The total supply of VYN tokens is 150,000 VYN . This is because to get this token, users have to do mining for some period of time to “fight over” this token. The genesis mining period only runs for 29 days and every 30 seconds (every 60 Vexanium blocks produced) there will only be 1 token generated. So in other words, during this genesis mining program there will only be 85000 VYN tokens created.

You also need to know that this token is a token that will have eight decimals behind it, so that for 1 token that is created for 30 seconds it will be distributed to all users that stake VEX coins for the genesis mining. So there could be users who get 0.00002981 VYN and there are also users who get 0.00128021 VYN (based on the amount of stake that the user makes).

This program will run for 29 Days. Stake VEX into VYN’s smart contract. Users can unstake anytime. The smart contract will generate 1 VYN every 60 Vexanium blocks (30 seconds), with no handling fees when users unstake the VEX coins.

This program is 2 years long. During regular mining, users can stake VEX, USDV, and other community project tokens. After that, the liquidity mining pools will be set up. Users can participate in mining by staking different tokens.

This program is 2 years long (VEX, VYN, and USDV). The details of this program will be announced later (TBA).

This is USDV treasury backup.

How to Participate in the VYN Genesis Mining Program?

To participate in the VYN Genesis Mining Program, users only need to stake VEX coins or USDV tokens on the VYNDAO platform using the Vex Wallet or from the official website. In about 3 days after unstaking, the smart contract on the Vexanium network will automatically return VEX coins and USDV tokens that were staked by users, after the genesis mining program period is over.

*Disclaimer: VYN tokens value is based on the market demand from the community and distributed via mining proportional to the community.