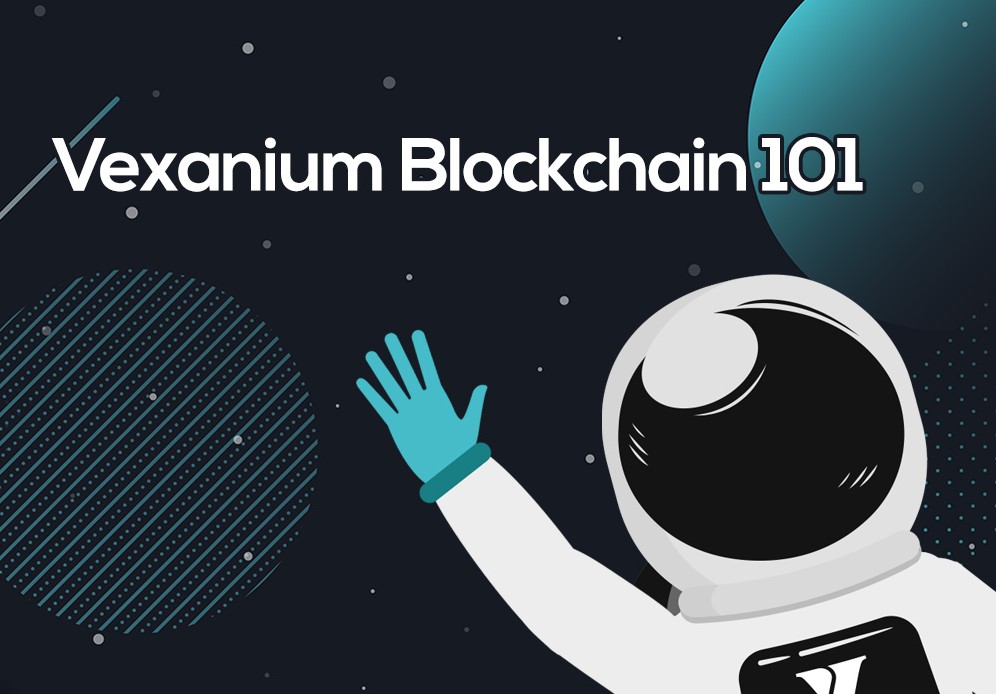 Vexanium is an open-source blockchain protocol to create smart contracts and decentralized applications (Dapps) on top of its network. As a blockchain and smart contract platform, Vexanium is focusing on building infrastructure (first layer) that enables developers (startups, corporates, and businesses) to create many projects based on blockchain technology. Vexanium business model is a decentralized resource model similar to AWS, Alicoud, and other cloud providers.

The Vexanium blockchain network launched by Vexanium Foundation, a non-profit organization that has been established since March 2018.

With its technology, Vexanium claims to provide the next generation blockchain that is created for decentralized applications usability and retail penetration by also utilizing its cryptocurrency, which is called VEX coin. Vexanium blockchain technology is a technology that prioritizes network scalability and speed, without eliminating the concept of decentralization from the blockchain itself.

Who Owns and Run Vexanium Blockchain?

Even though Vexanium is launched by the Vexanium foundation, Vexanium is a decentralized network that can only be managed by people who are part of the network (nodes) or commonly called block producers. The block producers are tasked to run the Vexanium blockchain network by validating each transaction and making regulations on the network, this is what is called an autonomous organization.

Vexanium can accommodate 1500 to 2000 TPS (transactions per second) whereas most blockchain platforms will only accommodate 10 to 100 TPS. This is because block production (transaction validation) is done every 0.5 seconds or the same as two blocks every second, while the previous blockchain generation requires about one to ten minutes to produce one block.

In Vexanium, the governance is maintained by putting in jurisdiction and selection of law, as well as reciprocally accepted rules. This can be achieved via the binding constitution. every group action in Vexanium needs the hash of the constitution connected to the signature, which primarily binds the users to the constitution. This governance is controlled by block producers which are incorporated into nodes in the Vexanium blockchain network.

All Dapps deployed on the Vexanium blockchain platform are upgradeable. this implies users may be licensed to deploy fixed code, add/change options, and alter application logic. Moreover, developers will reiterate their application while not the chance of being for good hooked up to an error or bug. Nonetheless, it’s additionally doable to deploy irreversible Vexanium smart contracts.

Blockchain governance can be run with one of the consensus mechanisms created by Dan Larimer (also a Block.one CTO, which launched the EOS blockchain), namely DPoS. This consensus is used in the Vexanium blockchain network so that it can achieve the key features described above.

How does DPoS Work?

This means these delegates will govern the system. These block producers are responsible to validate transactions, administer dealings fees, block sizes, witness pay and etc. Moreover, the election of block producers may be a continuous method that people within the network undertake.

What are the Advantages of DPoS?

Vex Wallet is a digital blockchain wallet to store digital assets that are on the Vexanium blockchain network. The specialty of this Vex Wallet is that it doesn’t incur transaction fees on each transaction or every action created in the network. However, because of the resource fee model. users just need to purchase NET, CPU, and RAM.

In addition, there other blockchain wallet technology that has been integrated with Vexanium blockchain technology to hold VEX coins, it’s called the AToken Wallet.

Vexplorer can be used to monitor VEX-USD live charts directly, RAM costs, purchases or sell RAM. The browser can even show the number of blocks that are made by Block Producers to the history of transactions that occur on the Vexanium blockchain, and producers rate wherever block producers can get a VEX quantity in line with their proportion choice where block producers are going to be obtained whenever they create blocks.

Users can also use a blockchain explorer called Vex Account Monitor (blockchain browser made by a block producer Vexanium) to check all things related to accounts on the blockchain network.

Decentralized finance is blockchain-based financial technology engineered on the Vexanium blockchain. This technology is an open supply protocol, so users can produce and issue their own digital assets. Users can build loan protocols, investments, market predictions, exchange, and stable coins.

With blockchain, users can control their own data, this can prevent third parties or other parties from using user data without the user’s knowledge. In addition, the stored data is also safer because it is stored in a decentralized way. Just like one of Dapp on the Vexanium blockchain network, called Trusti, it is made to certify documents, business contracts, or any digital information with blockchain.

Game with a blockchain-based system can verify and secure all varieties of digital information, as well as in-game history, digital things, and tokenized assets. This way, every player will have full management over their accounts and digital assets. There are various ways of developing and maintaining a blockchain game.

Banking and financial services are still struggling inside with outdated and outdated financial operational processes, slow payment settlements, narrow transparency, and security system vulnerabilities. Blockchain technology can solve all of the above problems with an accountable and transparent governance system, increased alignment of incentives among stakeholders, a secure technology system and infrastructure, and an efficient business model. What’s more, Blockchain enables efforts to digitize various financial instruments and tools that bring greater liquidity, much lower capital costs, reduced partner risk, and access to investors with a broader capital base.

From a financial perspective, some things that can be done with blockchain technology are like directly connect banks from across the world with no intermediaries in near-instant transactions. It can also permit little and medium investors to access investment opportunities that were unavailable to them before.

Supply chains or logistics networks are universally and globally very inefficient. In addition to being inefficient, the supply chain is also difficult to trace, and it is unfortunate that it is often exploited. The inefficiency of the world’s logistics network can be done intentionally or not. Accidentally, miscalculated container costs, documentation errors, or mistakes in labeling can be a big loss for companies that do not need it. Deliberate mistakes are often made because of corrupt behavior that is detrimental to the company committed by people who work within the company. This happens because of the many fissures that can not be detected.

The Blockchain network in the company forms a joint Information Technology infrastructure that simplifies workflows for stakeholders throughout the supply chain flow. Blockchain facilitates accurate asset tracking, enables increased licensing of services, products, and software, and ultimately increases transparency to the source of consumer goods, from source to point of consumption. If this is applied, intentional and unintentional mistakes will be reduced to 0, so the company will achieve more profit than before.

Oil and gas companies suffer losses from inactive infrastructure and several other problems related to transparency, efficiency, and optimization of information and data. Blockchain technologies such as Vexanium have the potential to significantly improve business process efficiency and be able to reduce costs associated with operating and distributing oil and gas. When combined with an IoT device, the blockchain power network will be able to automate various billing and settlement problems, settle payments right away, and reduce related costs.

National and local governments rely heavily on processes that have been passed down through generations, old software, and organizational structures that are already inefficient. On the other hand, the public sector needs a high level of security.

Inaccurate information, data silos, and lack of communication between patients, organizers, hospitals, and doctors are detrimental to developments in the health sector.

Blockchain-based data sovereignty and licensed information exchange scenarios will lead to faster, more efficient and safer medical data management, and integrated and responsive drug and medical device tracking. These can significantly improve services and care for patients, facilitate progress for medical discoveries, ensure the authenticity of drugs circulating on the world market, and many other benefits.

Trade finance and commodity exchange systems are very dependent on analog records on paper that are vulnerable to unintentional fraud, errors, and human negligence, and the slow process of recording.

Blockchain can optimize the financing process and accelerate industrial operations by providing solutions that are safe, concise, and without using notes on paper. By using the Blockchain, every element of the financial process of trading can be converted into digital data, and only authorized parties can access the data, validate any documentation, and most importantly make transactions.

Legal services in the world are expected to grow to $ 1,011 billion by 2021. Over time with the development of this industry, manual work and consuming much energy consumes a large part of the work process. The time wasted in making documents and management activities cost the company up to $ 9,071 per lawyer per year, equivalent to a 9.8% loss in total productivity.

Digital piracy, the making of fake copies, violations of studio intellectual property, and duplication of digital goods make the entertainment industry suffer losses. The US film and TV industry suffers losses of $ 71 billion per year. This large number certainly does not reach the parties who have the right to every work they produce. This large loss can be used to finance or produce works that are better than before.

Blockchain can make big books that can be distributed that can track the life cycle of any existing content. This technology has great potential to drastically reduce the crime of pirating intellectual property, protect any published digital content, and facilitate the distribution of original and authentic digital collections.

Housing investment is often inaccessible to many parties. While investing in real estate is one of the most promising investments. Currently, investment in housing offers investors limited liquidity but requires the involvement of several other intermediaries so that transaction costs are higher.

Smart Contracts by the Vexanium blockchain improves the workability of Housing investment by eliminating intermediaries and optimizing each process. In addition, Blockchain technology enables the industry to digitize financial assets and instruments. This allows ownership fractionation, increased liquidity, and free access to investment opportunities in the real estate sector.

The pace of the retail fashion & luxury industry is accelerating with changing consumer demands. Blockchain technology stands to overcome the challenges of the old-fashioned industry by improving data management functions, improving supply chain operations, and reducing the risk of fake and gray markets.

As technology in the protocol level, it has endless possibilities to be utilized in many industries, by using its ecosystems such as smart contract platform, Dapps platform, Defi platform, and many more. With this in mind, many developers, programmers, and other users to use Vexanium blockchain network as a solution for today’s problem.

We hope you have understood the big picture of the Vexanium blockchain after reading this article. if you still have questions about Vexanium please check the FAQ or contact directly through Vexanium Foundation email: info@vexanium.com